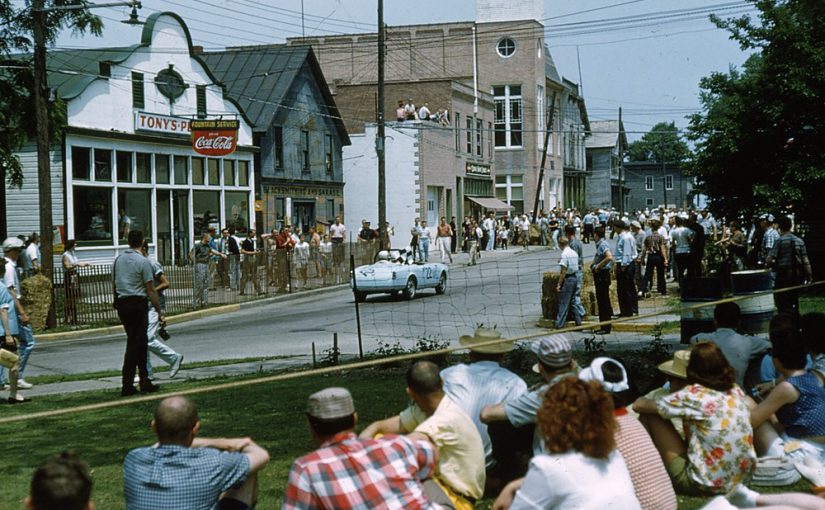 The 2018 Put-in-Bay Road Race Reunion will honor 60 years of the intrepid Austin Healey Bugeye Sprite (introduced in 1958) and Porsche. In 2018, they will be celebrating 70 years of building some of the most desirable cars ever conceived. Strong turnouts for racing and road-going examples of both marquees are anticipated as well as the usual array of vintage sports cars. Examples include Alfa Romeo, Fiat, Austin Mini, MG, Lotus, Morgan, Triumph and others. There is a growing gaggle of vintage open wheel cars also.

Approaching its 10th year, the annual Put-in-Bay Road Race Reunion event has a revised date pattern for 2018. Previously held in late August, the 2018 event has moved to late September (September 24 – 27) with racing to be held on Tuesday and Wednesday, September 25 and 26, 2018. There was a record entry for the 2017 event. Owner-drivers of more than 100 race cars and some 60 street cars came to play. Now, organizers are expecting a comparable turnout in 2018 despite the date change.

“Bugeye Sprites were highly represented in the original 1958 and later races at Put-in-Bay and a variety of Porsches were significant competitors at the original races,” said event founder and race director Jack Woehrle. “Both marquees represent their own brand of durability and competitiveness, so we think it’s quite fitting to honor them for our 10th annual event.” Interested in more Put-in-Bay Events?

The modern-day Put-in-Bay sports car races began with a small reunion in 2009. That event marked the beginning of an effort to celebrate the history of small-bore sports car races that were held from 1952 to 1959 and once in 1963 at historic Put-in-Bay. The event has steadily grown and evolved into a substantial annual sports car happening. It is focused around vintage races at the Put-in-Bay Airport featuring the same types of cars that raced on the island back in the day.

Uniquely offering entry options for both racing and non-racing participants, today’s Put-in-Bay Road Race Reunion generally welcomes vintage race prepared pre-1973 production cars. These care are up to 3 liters engine displacement, sports racers up to 1.5 liters and vintage Formula Vees, Formula Juniors and Formula Fords. Entry exceptions are not uncommon! Interested racers of cars outside the normal entry guidelines should reach out to the race director, Jack Woehrle. There is also a limited quantity of non-racing entry options for pre-1964 “Heritage” sports cars and for post-1963 “Guest” street cars.

Put-in-Bay Ohio is a nostalgic little tourist town on South Bass Island. Just a short ferry ride off the shore of Cedar Point on Lake Erie near Sandusky, Ohio. Put-in-Bay is a resort community little changed from the 1950s. It’s one of the few places in North America where post-war sports cars raced through towns and countrysides on public roads and where those roads exist today virtually unchanged.