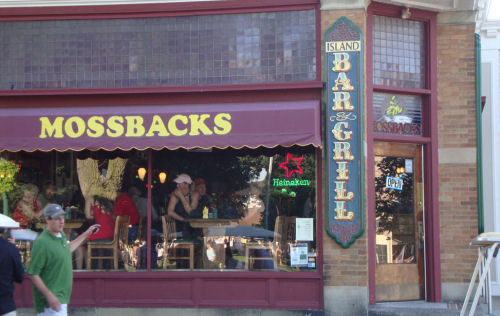 Mossbacks Island Bar & Grill is a Put-in-Bay restaurant and an island hotspot for breakfast. Come by from 10 AM to 1 PM for classic breakfast fare like eggs, bacon, and biscuits and gravy. Even better, order the Commodore’s Favorite, a buttermilk biscuit topped with a cheesy hash brown casserole, scrambled eggs, sausage gravy, and bacon. While you’re at it, go ahead and treat yourself to a Bloody Mary, a Mimosa, or, for the iron-gulleted bruncher, a Breakfast Bomb consisting of Jameson and butterscotch schnapps dropped in orange juice. The daily grind back home is waiting, but right now you deserve to unwind. Stick around for their fantastic dinner options as well. They specialize in local Lake Erie’s delectable fish, such as Walleye and Yellow Perch.

For more adult beverages head right next door to The Fish Bowl, which shares the Valentine Doller building with Mossbacks. This historic Put-in-Bay building was named after Valentine Doller, the enigmatic 19th-century patriarch of the Put-in-Bay’s most important family. Did Valentine stash his hoard of gold ducats somewhere in the building? Tenants would deny such an outlandish rumor, but you can certainly find a gigantic beer served in a literal fish bowl and a spacious deck offering spectacular views of downtown Put-in-Bay. Both Put-in-Bay restaurants are conveniently located on Catawba Avenue and are easily accessible from the nearby Jet Express ferry terminal as well as other outstanding Put-in-Bay attractions like the Butterfly House and Fort Amaze'n. Book your trip today, you won't regret it!