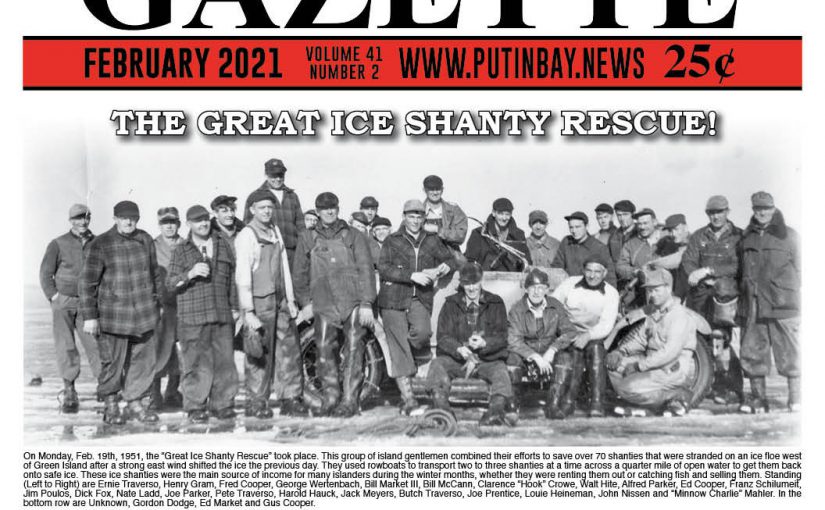 As of this writing the water temperature in the Western basin is 33°. Ice formation inshore is thin an sporadic. Offshore waters are mostly open.

The Rules of the Road

I predict a busier boating year than usual in and around Put-in-Bay for the upcoming boating season. Surprisingly, the reason is Covid-19. Last year (2020) boat sales were way up. This is probably a result of people looking for safe activities during the pandemic and there is no reason to think that this trend won’t continue for the first and second quarters of 2021. More boats mean more congestion on our waterways therefore understanding the rules of the road become increasingly important.

During our last off-season mariner class for 2020-21 we are going to discuss some of the Rules of the Road plus a few other items. The following 10 questions are based on things I’ve actually witnessed in our harbor. If you are a PIB or Lake Erie Islands boater please take a moment to take the quiz.

1) When overtaking another vessel on her starboard side. How many blasts of the horn are required to let boaters know of your intention to pass? a) One long blast. b) Two short blasts. c) No horn blast is required, just proceed carefully.

2) During the high season the marina downtown is packed nearly to capacity. As you pull into the marina you hear another vessel give his horn three short blasts. What is being communicated to you and other boaters. a) Nothing, there are lots of horns being blasted. b) A skipper is indicating a claim to a particular slip or rafting position prior to docking. c) There is a nearby vessel proceeding astern (backing – backing out).

3) When in distress, what is the VHF emergency channel? a) Use any channel in an emergency as time is of the essence. b) Channel 16. c) Channel 9.

5) When entering PIB harbor there are two “No Wake” boards on the port and starboard sides of the channel. What is No Wake? a) Any passengers asleep when entering the harbor should not be awoke until the vessel is docked and secured. b) Named after some guy Kelvin. The resulting effect of his equation should be minimized or eliminated. (w=√gk,). c) All passengers should remain seated while underway in the channel.

6) When entering the harbor at night, turn on your docking lights if your vessel is so equipped. This will aid in visibility and help in preventing nighttime collisions . a) True b) False.

7) What are jet ski legal hours of operation? a) Anytime if the jet ski has a valid state registration sticker. b) 6 a.m. to 6 p.m. for both registered and unregistered jet skis. c) Sunrise to sunset.

8) Kayaks are not required to be registered? a) True b) False

9) Is it okay to let passengers sit on the gunwales, transom or bow while underway? a) Yes, so long as everyone is safe and having a good time. b) No, not until you’ve cleared the harbor and in open waters. c) No occupant of a vessel underway shall sit, stand or walk on any area not designed for that movement.

10) It is okay to swim off the transom while docked in the marina? a) True b) False

1) When overtaking another vessel it is two short blasts of your horn when passing on your starboard side and one blast to port.

2) When backing your vessel out of a slip in a marina (for example) you are to give 3 short horn blasts alerting others of your movement astern.

3) The emergency channel is always channel 16. You may be instructed by the Coast Guard to change to another working channel at some point.

4) 68, 69, 71, 72 are common working channels but not the only ones. Working channels are those designated for communications between non-commercial vessels.

5) This was a bit of a trick question. The foaming water created at your transom by your vessels forward momentum is your wake and is expressed as follows: w=√gk, where w the angular frequency equals the square root of g-gravity times k-angular wavenumber. This equation was created by Lord Kelvin resulting in what’s called the Kelvin Wake or as we now refer to it as simply “Wake.” I know…who cares, I just couldn’t resist. The important thing is that a “No Wake” means little to no splashing or bubbles created by your vessel off your transom.

7) In Ohio jet ski operation is from sunrise to sunset. The actual times vary seasonally.

8) False. Like other vessels. Kayaks and canoes require state registration. Sailboards, kiteboards, paddleboards and belly boats or float tubes are exempt from registration and titling laws.

9) No occupant of a vessel that is underway shall sit, stand, or walk on any area not designed for that movement except when immediately necessary for safe and reasonable navigation or operation.

10) False. It is prohibited by federal law to swim in a marina…period! Quite simply the risk is shock and electrocution. Sadly, we’ve had this happen at PIB.

Next month we will begin preparation of our vessel for spring launch.

The previous piece is published in this month’s Put-in-Bay Gazette. The Gazette has been producing incredible independent Put-in-Bay island news for over 40 years. If you have any interest at all in what is happening on South Bass Island, we urge you strongly to subscribe to the Put-in-Bay Gazette. One-year online subscriptions are only $15, and print subscriptions are available as well. To subscribe please click here.

This piece of Put-in-Bay journalism has been provided to islandclub.com courtesy of the Put-in-Bay Gazette, Put-in-Bay’s only local newspaper. Visit their website putinbay.news for more information and to subscribe!