The crown jewel of the Lake Erie Islands, Put-in-Bay, has been a favorite destination of tourists for over 200 years.  Many are aware of the island’s rich history and its role in the War of 1812 but less know if the rich hotel heritage.  Put-in-Bay, also known as South Bass Island, served as a type of headquarters for Commodore Perry and the American Navy during the war.  From the harbor, Perry was able to defeat the British in the Battle of Lake Erie, which proved to be the pivotal victory in the conflict.  Ever since then, Put-in-Bay hotel heritage has come to stand for freedom, joy, and peace.

In the years following the war, many came to the island to soak up its pleasures.  Some would walk along the lakefront.  Others would attend celebratory commemorations of the Battle of Lake Erie.  Regardless of their reason for arriving, visitors would have to leave the island by nightfall because there were no hotels or lodgings on the island for tourists.

Today, first-rate establishments like the Put-in-Bay Condos or the classic Island Club rentals allow tourists to enjoy more time on the island.  But, this wasn’t always the case. In fact, island-goers had to wait approximately 50 years after the War of 1812 ended before overnight lodgings arrived.

The First Hotel on Put-in-Bay

The very first hotel on the island had a humble beginning.  In the early 1860s, a man by the name of Frederick Cooper saw an opportunity for business and added rooms to a house near the boat landing.  As the demand for more guests increased, he built more rooms.

A few years later, in 1867, he found a partner (Andrew Decker), and they officially named their budding enterprise The Island Home.  Over the next few years, The Island Home underwent several expansions.  Builders added stables, a bowling alley, a bar, and a beer garden.  They sold it in 1879, and the new owner, Henry Beebe, re-named the establishment the Perry House.

Under Beebe’s direction, island contractors added a three-story wing, an ice cream parlor, and a ballroom.  The Perry House could accommodate 300 guests at a time, and Mrs. Beebe served as the hostess for fancy dinners every night at 6 p.m.  For about 25 years, the Perry House was the place to be for ballroom dancing, parties, and a lakeside excursion.

In 1910, the Perry House was sold and re-named the Hotel Commodore.  It was sold again to the Schlitz Brewing Company a few years later.

Regrettably, the hotel caught fire and burned to the ground on August 23, 1932.

The Put-in-Bay House:  Fires, A Colonial, and a New Saloon

The Put-in-Bay House developed almost concurrently with the first hotel on Put-in-Bay.  Once owned by island developer A.P. Edwards, this island “White House” was purchased by Joseph W. Gray, then-editor for The Plain Dealer, in 1861 as a rooming house.  Ownership changed hands a few times over the next several years until Sweeney, West and Company took possession.  Contractors added a new wing, which was accompanied by a 500-foot hall running along the ground floor of the main building.  Builders placed a majestic fountain in front of each wing and expanded the dining room to seat about 1000 people.  Sweeney, West, and Company’s Put-in-Bay House became a vibrant, exciting destination for over a decade.

On August 30, 1878, The Put-in-Bay House was going to host a substantial charity benefit for those affected by yellow fever in the south.   1000 tickets were sold, but, fire struck this island lodging, and the house burned to the ground before the party.

Years later, it was rebuilt it as the famous Colonial Hotel, which stood for over 100 years before also burning down in 1988, leading many to believe the land is cursed.  Today, where the Colonial once existed, stand the Beer Barrel Saloon and Tipper’s Restaurant.  You can read more about the Colonial’s fascinating tale here. 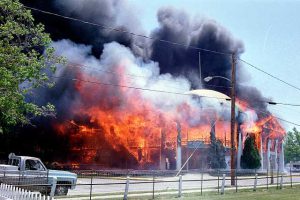 The Hunker House opened in 1871.  It was located on the eastern edge of the village park and had its own vineyard and orchard.  The Hunker House was famous for its wines, ice cream, and pies—all made from homegrown fruits.  Like many other island properties, the Hunker House endured multiple owners and name changes (i.e. Ward Summer Resort, Detroit House, Crescent Hotel).  At its peak, this establishment housed about 140 guests.  It closed in 1971.

The Gill House was built in the early 1800s and accommodated 40 people.  As time passed, it, too, faced name changes, depending on the owner.  At one time, it was known as Bon Air.  In another period, it became the Smith Hotel.  Then, it morphed into the Hotel Oelschlager.  As the Hotel Oelschlager, it featured a general store where visitors could purchase groceries and souvenirs.  It also boasted an attached restaurant.  Today, the building still stands as the Country House gift shop and antique store—a famous landmark and destination.

Eagle Cottage was once owned and operated as a boarding house until it was purchased in 1946 and renamed the Friendly Inn.  It was sold in 1970 and now stands as the Crew’s Nest—a boat club and resort.

Other buildings, like the Bay View House and the Reibel House, have come and gone, but the Park Hotel (originally known as the Deutsches Hotel) still stands today.  It was built in the 1870s with 26 Victorian-style rooms, right next to the Round House Bar.

Perhaps the most famous, or infamous, of all Put-in-Bay Hotels was Hotel Victory. 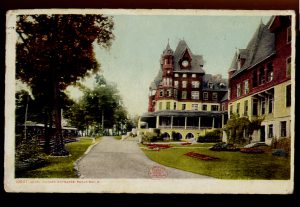 Hotel Victory was to be the grandest hotel in America, and, when it opened in 1892 (and was fully completed in 1896), it was, indeed, the largest hotel in the United States.  The majestic establishment featured miles of carpet, a boardwalk to the beach, fountains, a pool, and much, much more before it, too, met an untimely demise.

Put-in-Bay has a flavorful history, and its hotel heritage is a small part of that legacy.  We’re proud to accompany the memories and are eager to build more.