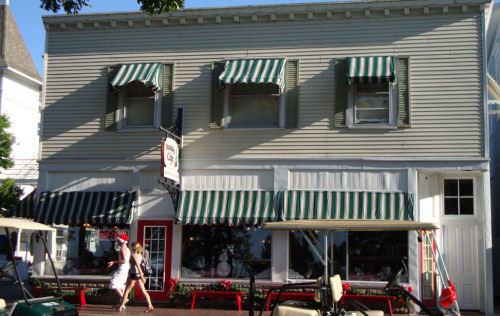 Pasquale’s Cafe occupies a former United States Customs Office on Delaware Avenue and is one of the most popular of Put-in-Bay restaurants. A quirky sign with a smiley face in the O glows neon in the window, an omen for the cheerful day you’re about to kick off. The crowds start early to get a bite of The Hot Mess, a breakfast plate of scrambled eggs, hash browns, bacon, sausage gravy, and cheddar monterey jack cheese. Once you've gone down the path of The Hot Mess, finish it off with sparkling mimosa, because... Mimosas! From there it doesn’t let up, as Pasquale’s fans clamor for their signature PPD Burger, Gloria’s summer salad, the Pompei Chicken, Bosco sticks and a Baked Lobster Mac and Cheese to die for. All manner of American fare is dished out with pride. With such a delicious menu, you could be forgiven for thinking Pasquale’s Cafe to be a jack of all trades, but they are a master of at least one: the ever-so American dish known as “pizza”.
Some Pizzas You Can Get at Pasquale’s:

Pasquale’s Cafe provides a superb view of DeRivera Park. Waterfront dining is available. They also proudly serve Pepsi products. One could stay at Pasquale’s all day, sipping on Commodore Perry IPA and watching the people of historic downtown Put-in-Bay. Find your way to Pasquale’s and you won't be disappointed!